Making Mistakes, No Fear of Failure, by Aaron Ralston 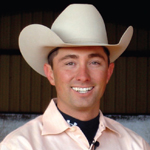 “If you find yourself in a hole, quit digging,” Will Rogers

Step back and remove yourself from the situation. Sometimes it is better to let your horse or yourself, reevaluate. I recently had a two year old filly that when hauled to the local fairgrounds arena, had an uncharacteristically poor start to her ride. It was her first trip away from home and I knew from past experience that she was not going to be the same horse I was used to. The change in environment often raises the anxiety levels in all horses. I began by doing some basic ground exercises to get her to relax and engage her thinking response. At this time, the tractor came in to work the arena and made it difficult for her to focus. I was feeling rushed to get more horses rode and work with some students so I decided to go ahead and ride her out of it. I should have known better, she never did focus and while I worked her from her back, her mouth and response to the bit became dull. In the past, I would have stuck it out and pushed her through it. Mentally I would have got my way, but physically that would not have helped me with the lightness and sharpness I had been so careful to build into her. The important thing to remember is that she is young and is building her foundation of references. An older horse with a firm physical understanding may have received a different approach from me that day.
I then stepped off her, tied her up, and hobbled her. This allowed both of us to step back and take a picture of the situation and have the needed time to process it. By eliminating the dimension of self motion, I was able to slow down the speed of the stimuli causing the processing anxiety in her mind, thus holding a still picture for her evaluation. Throughout the hour or so, she began to accept her front legs being restrained and slowly lowered her head until she was nearly asleep. We often hear of controlling their feet to control their mind, but that doesn’t have to mean only by moving them. By letting her work against herself and the hobbles, the restriction of movement actually began to affect her mind. It is important to note that this was not the first time she had been hobbled. She has been gradually conditioned to them for many months in positive situations, usually after a workout while she is in a comfortable and relaxed state of mind.
Once she softened and relaxed with the hobbles, I began again with some focus exercises from the ground. The change in her was night and day! When I first started, I could have moved her around, changed her directions, while/and/or getting her tired in order to get her focused for her session. There is a time and place for all of those methods, however, in this situation I was able to accomplish more with less negative reinforcement associated with me as a third party.
www.rideupllc.com