History of Reining, by Sandy Collier 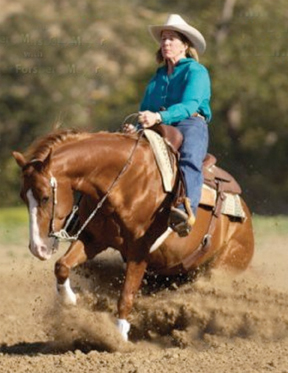 Reining is an addictive sport.   I came to it late, having started my riding career in English disciplines (hunter/jumpers and eventing as a youth), and later discovering working cow horses.   The cow horses ultimately led to my interest in reining.   Once I began learning the nuances of this demanding discipline in my early twenties, I was hooked.   Reining has been called “cowboy dressage,” and with good reason.   Like dressage, reining requires you and your horse to interact in a smooth, seemingly effortless way.   Your pattern of circles, straight lines, stops, and turns must be seamless; your horse’s responses ““ fluid, as well.   Reaching a high level of competency in reining requires a lot of the right kind of practice.   In upcoming chapters, I’ll be helping you achieve that.   In this chapter, I’ll first examine the evolution of the sport, from its beginnings to its current state. Then I’ll share parts of my own personal journey, detailing how and why my philosophies regarding horse training have evolved to where they are today.

Reining is an American legacy.   On the vast working cattle ranches of the nineteenth century, especially in Oklahoma and California, there were few fences and thousands of cattle to mind.   The early working cowboy had need of a steady, athletic mount that could help him with his daily chores holding and driving cattle, separating one cow from the herd, chasing down a renegade calf.   A good horse had to be light on his feet and easy to guide, with quick speed and a handy stop.

The cowboy was proud of his well-trained mount, and sought to match him against all comers. This led to informal contests, which were a way to test the handiness and obedience a horse needed to carry his rider through a busy day on the ranch and out on the range.

Later, as the interest in good working horses spread beyond the cattle ranch, opportunities to show what these horses could do began to multiply.   The American Quarter Horse Association (AQHA), founded in 1940, added reining to its official list of classes in 1950.   Early patterns were a complicated maze of straight lines, turns, circles, and figure eights.   They required changes in speed, flying changes of lead, rollbacks, sliding stops, and backups.   A watershed for the reining class came in 1965.   Inspired by the quality of horses present at an Ohio Quarter Horse show, the judge and contestants set aside the competition’s official reining pattern and came up with a new, more challenging one.   Bill Horn and Continental King won that class with a performance that left reining enthusiasts everywhere buzzing.   By late the following year, the National Reining Horse Association (NRHA) had been founded to promote reining as a sport unto its own.   Under the NRHA, reining exploded in popularity.   The NRHA Futurity debuted that same year (1966) and by 1983, the winner’s share of the purse was a guaranteed $100,000.   In 1985, the NRHA changed the judging system to require the scoring of individual maneuvers within a pattern, rather than the more subjective assessment of an overall run that had been the norm until then.

As refined under the NRHA, reining became more stylized, with less emphasis on the sport’s ranch-chore roots and more emphasis on a fluid, eyepleasing run.   In 1986,the NRHA Futurity moved from Columbus, Ohio, to its current home in Oklahoma City, Oklahoma.   Also that year, the NRHA Hall of Fame was born, with Dale Wilkinson as its first inductee.   By then, reining at the grassroots level had blossomed across the country, fostering growing numbers of local reining clubs.   At the same time, breeders were producing horses specifically for the sport, and competition at the highest levels was becoming tougher than ever.

In 1994, “super slider” Hollywood Jac 86,a grandson of the revered King P234 (sire of over 20 AQHA champions and some of the finest breeding stock in the country), became the first NRHA Million Dollar Sire (having offspring that had collectively earned that amount in NRHA competition). The following year, the legendary Bill Horn became the first Million Dollar Rider.

Another pivotal point came in 1998 when reining became the first Western sport to come under the auspices of the United States Equestrian Team (USET).   Now an international sport, reining is represented at such events as the USET Festival of Champions and the World Equestrian Games. The ultimate goal is to establish the sport as the first Western equestrian event at the Olympics.

Today’s geometric reining patterns require accuracy, fluidity, balance, and coordination from the horse, who is guided with but the lightest touch on a draped rein.   He must perform large, fast circles; small, slow circles; flying changes of lead at the gallop; sliding stops; 180-degree rollbacks; and 360degree spins to the left and the right.

Worldwide NRHA membership now tops 15,000, with total prize money in 2006 exceeding $10 million.   There are 55 NRHA affiliated local clubs in the US, and another 38 in Canada and abroad.

Why is reining so popular? Because it requires horse and rider to execute a variety of specific movements and put them together in a seamless way that will appeal to both judges and audience.   Reining is fun because it’s so challenging.   Of course, I knew very little about the finer points of reining when I first began with horses and what I did know about breaking and training involved the old ­ fashioned, rough-and-tumble way.   But all that would change when, in my late teens, I left my New England home base and headed west.

About Sandy Collier:  AQHA Professional Horseman  Sandy Collier is the only woman to win the  National Reined Cow Horse Association  World Championship Snaffle Bit Futurity Open  Championship.   She is an AQHA World Champion  and International clinician and judge and was  inducted into the Cowgirl Hall of Fame last year.  Many training videos and advice can be found at:    www.SandyCollier.com

Set Goals Rather Than Resolutions, by Barbra Schulte