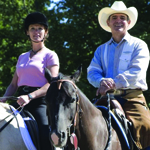 “Help! My horse is fine on the trail until we canter, lope or gallop; then he’s wired and hard to control for the rest of the ride.”
“My horse won’t cross streams/gulleys/bridges/logs/etc; how do I get him to go where I ask?”
“My horse starts to jig as soon as I get on and fights me for the whole ride! What can I do?”
“My horse doesn’t want to leave the barn area at all!”
“My horse spooks at almost everything we see out there.”
“I can’t ride my horse unless his buddy is right beside him. I want to go out alone sometimes but it’s just too hard to control him!”
” I can’t stop my horse on the trail. We stop pretty well in the arena, and I don’t know what to do. I like to go fast out there, but it doesn’t feel safe!”

Do any of the above sound familiar? If so, please know that you’re not alone. The problems cited above are some of the most common issues that people have with their horses. And although some horses can be unusually brave, many horse owners experience these challenges and want to resolve them. They believe that their horses have the potential to behave better, become braver and be the trusted friend that they dreamed about when they bought them. And they are right, but how?
In this three part series we’ll address why these problems occur, and show you effective techniques and exercises to resolve them. The “fixes” that follow work on all breeds of horses.
Many people initially are drawn to horses because they are “adorable” or “pretty”, and therefore assume that they are easy to control, pull around or stop. When we hear comments like these, we tell people that, however cute they may be, all horses have prey animal instincts, herd mentalities, and perhaps most importantly, are very fast and strong. They must be taught the skills that we want them to have.
Now you may know that, in some countries, there may be only a few natural predators (other than man!), but we’re in America, the land of cougars, bears, coyotes, etc, and your horses are smart enough to fear predators even if they’ve not seen them before. Just think about it; if we humans came across a tiger in the woods, it would scare us even if we’ve never see none before. Maybe especially because we’d never seen it before.

© Bob Jeffreys 2/09. Bob Jeffreys and Suzanne Sheppard travel nationwide teaching people how to bring out the best in their horses.  horsesenseandcents.com/