One of the more common technologies used in today’s breeding facilities is the halter monitor. This small device hooks on to an alert when the mare lays down on her side for a set length of time. Alerts can be sent straight to a cell/home phone.
Zach kahn, breeding manager and senior freeze technician at Select Breeders Southwest , of Aubrey, Texas, has been using halter monitors for years. He believes the number of mares being monitored should be a major consideration when selecting the method and product. “I believe (the halter monitor) has its place and advantages over other systems”, said Kahn, who foaled out 11 mares last year.
One of those advantages is financial. The monitors are relatively inexpensive, which can help smaller facilities on a tight budget. All mares are not the same, though, and that can be challenging for this type of product. “This one really depends on the mare and the way she foals out. Some mares don’t want to lay down and have the foal, and that’s kind of a risk you could have,” Kahn said. “There are drawbacks to it as well. I had a couple of mares this year that, as soon as you turned the lights off int he barn, they laid down all night long, and it will call you for two weeks before they actually have the foal. There is the potential for a lot of false alerts.”
Kahn has had great success with halter monitors and likes that they can be used for situations other than foaling. He can put the monitor on a mare at any time during the pregnancy without worrying about it making her uncomfortable or detaching, unlike other monitors.
This year, Select Breeders Southwest added a camera system along with the halter transmitters. Using multiple methods had also halped Kahn get more sleep at night. “That was a really big help. Instead of having to go to the barn every time you get called, I have it so I can see it on my phone, so I can just look and see fi they’re really having the foal or if they are just laying down. That’s the first thing I would tell anybody to get if they’re trying to set up a foaling (monitor) situation.”  Excerpt from Quarter Horse News, December 15, 2014

Shown below is just one of many foaling alarm options: 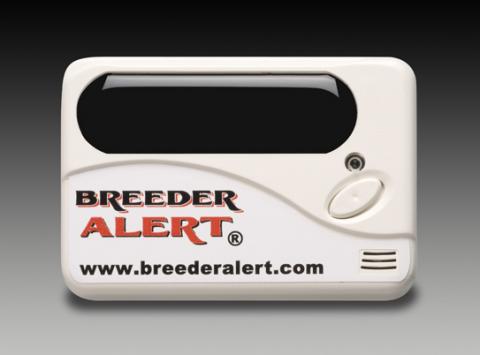 The Pager alerts the carrier when mare lies flat out in foaling position for at least 13 seconds. Pager’s New Feature has the added ability to show which mare/Transmitter is sending signal (via LED display). Pager has up to 1 mile transmission range from Repeater/Antenna depending on terrain and obstructions.
Breeder Alert ® Pager uses 2 AAA batteries with Low Battery Indicator. There is no limitation on number of Pagers used per system. If ordering additional Pagers at a later date, you just need to supply us with your System Serial Number. Additional Pagers are easily coded at your location.
One Pager can monitor up to 3 Main Units if you have more than one foaling barn. Pager will display which location/Main Unit sent alarm.
For more info, go to  www.breederalert.com/foaling-devices/foaling-alarm-pocket-pager
Related Topics:
Up Next

Is a Foaling Assistant the Answer?